The impostor quiz that went wrong.

CoinMarketCap’s controversial tweet was a quiz that asked in text “Who’s the imposter…? $BTC $ETH $BNB $LTC $XRP $XML $LINK #MKR $NEO”. This text was followed by an image with the words “There is 1 impostor amongst us”. Participants in the quiz were to spot the impostor. 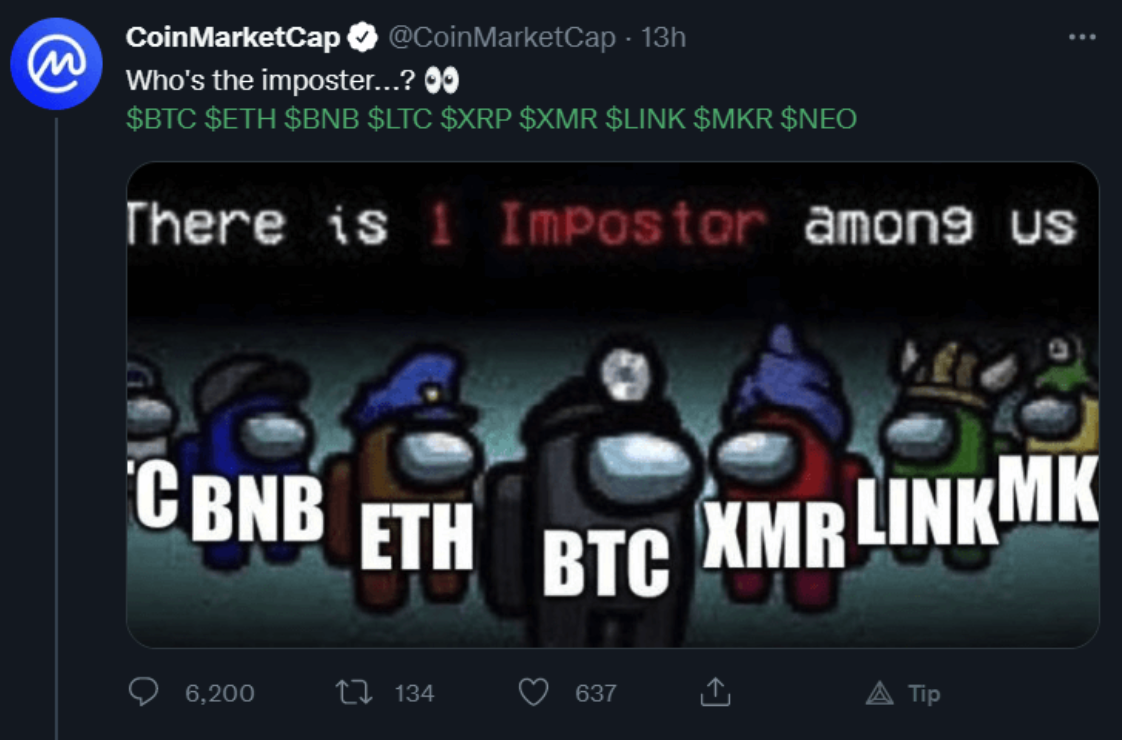 Shortly after, CoinMarketCap provided the answer in the comment section, “The answer: $XRP …”. According to CoinMarketCap, this is because XRP is “controlled and governed by authorities, hence defeating the purpose of #cryptocurrency. All the other coins in this [list] are decentralized and are basically “people’s crypto”.

CoinMarketCap being a market-data aggregator who should be seen to be neutral in the crypto market, its tweet that Ripple’s XRP was not a true cryptocurrency but an impostor did not go down well with many observers, particularly the Ripple community.

CoinMarketCap had to eventually delete the controversial tweet. But the tweet had been up long enough for responses from members from the XRP community.

Apology taken with a pinch of salt

Meanwhile, CoinMarketCap has apologized for the tweet, describing it as a mistake. According to CoinMarketCap, it “does not want to compare the merits of any crypto over the other”. CoinMarketCap claimed that a new team member who was not familiar enough with its policy on commenting on other projects was responsible for the tweet. CoinMarketCap reassured users that it aims to be unbiased, letting the algorithms do the talking. 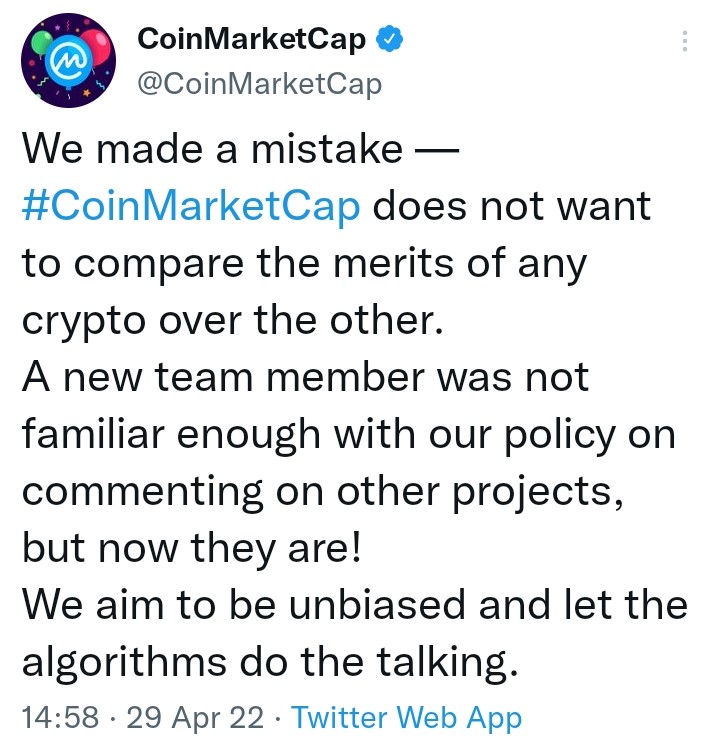 But CoinMarketCap’s apology has been largely taken with a pinch of salt by the Ripple community. 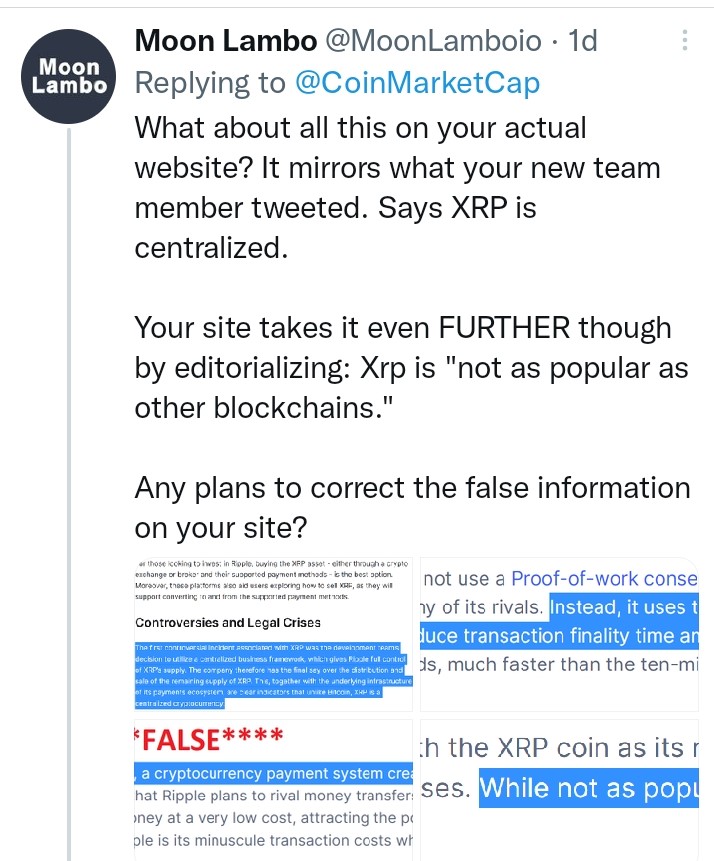 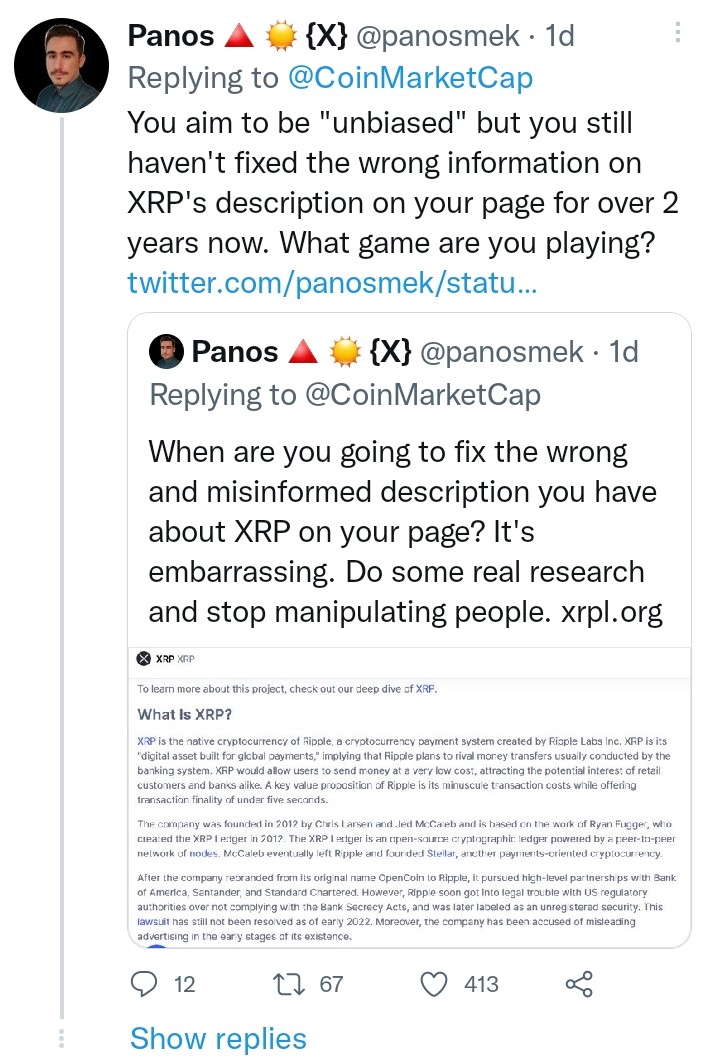 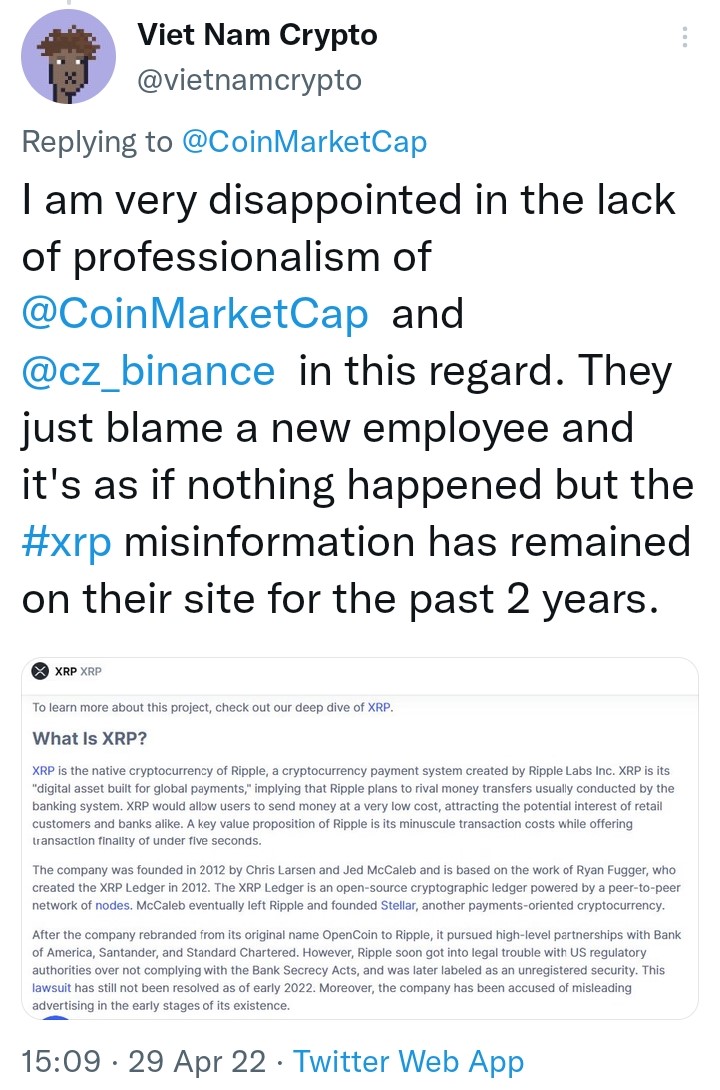 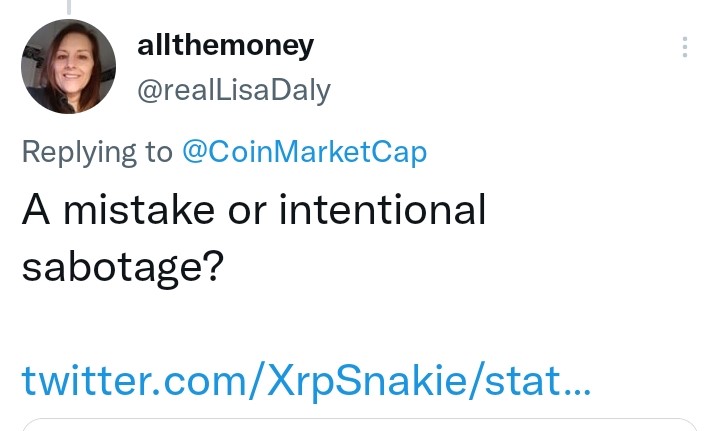 XRP price may have been negatively impacted by the situation. From $0.63 early Saturday, XRP price went down to $0.59, dropping from a market capitalization of $30.1billion to $28.1billion, thus shedding off up to $200 million.

For a coin that is already grappling with its unending suit with the SEC, a question mark on the cryptocurrency status and credibility of XRP by the crypto industry is the last thing the Ripple community needs.

What some others think

Outside the Ripple community, there are those who believe that CoinMarketCap’s description of Ripple’s XRP was not wrong because XRP is centrally controlled. According to this block, the ongoing suit between Ripple and the Securities and Exchange Commission (SEC) in the US over the status of XRP—the SEC claims that XRP meets all the features of a security as required under the Howey Test mainly due to the centralization of XRP.

Will CoinMarketCap, owned by Binance the promoters of BNB, be able to maintain 100% neutrality in the crypto market-data aggregation space?

It doesn’t matter whether the space is on a bear or bull run, investors will always seize every opportunity to buy their favorite crypto assets. Although a greater part of crypto investors will be attracted to the big names such as Bitcoin (BTC) and Ethereum(ETH), some are also inspired by memecoins. Do your understand the pros and cons of investing in memecoins?

While blockchain technology may mean different things to different people depending on its application, it is gradually transiting from just being a buzzword to becoming a technological innovation that innovators continue to apply across various sectors and industries. Blockchain, as a distributed ledger technology with cryptographic security, has been described as the third-generation Internet that […]

A new stablecoin is coming to town, EUROC. EUROC is backed 1:1 by the Euro. Although backed by the currency of the European Union, EUROC is from the US: Circle. Now let’s circle back on how this started. Circle, issuer of the USD Coin (USDC) stablecoin, announced last Thursday, the launch of a new stablecoin […]

Speaking at a TechCrunch program Tuesday, the Microsoft co-founder & billionaire described cryptocurrencies and NFTs as something that’s “100% based on greater fool theory”. This was Bill Gates’s response to the idea that cryptoassets, which he considers overvalued, will increase in price as long as there are enough investors willing to pay more for these […]