In Buffet’s words, “In my life, I try and avoid things that are stupid and evil and make me look bad in comparison to somebody else – and bitcoin does all three”. He continued, “In the first place, it’s stupid because it’s still likely to go to zero. It’s evil because it undermines the Federal Reserve System… and third, it makes us look foolish compared to the Communist leader in China. He was smart enough to ban bitcoin in China.”

“If you said… for a 1% interest in all the farmland in the United States, pay our group $25 billion, I’ll write you a check this afternoon,” Buffett said. “[For] $25 billion I now own 1% of the farmland. [If] you offer me 1% of all the apartment houses in the country and you want another $25 billion, I’ll write you a check, it’s very simple. Now if you told me you own all of the bitcoin in the world and you offered it to me for $25 I wouldn’t take it because what would I do with it? I’d have to sell it back to you one way or another. It isn’t going to do anything. The apartments are going to produce rent and the farms are going to produce food.”

Well, fiat currencies also produce nothing. Absolutely nothing. So why does Buffet not also think that the Dollar is rat poison?  Buffet shifts the ability to produce to being valuable.

“Assets, to have value, have to deliver something to somebody. And there’s only one currency that’s accepted”, said Charlie Munger, Vice Chairman of Berkshire Hathaway. “You can come up with all kinds of things — we can put up Berkshire coins… but in the end, this is money,” said Munger, holding up a $20 bill. “And there’s no reason in the world why the United States government… is going to let Berkshire money replace theirs.”

So whether, for the first time in human’s history, Bitcoin solved the double-spend problem in the transfer of value is immaterial to Warren Buffet. What does Craig Wright, the self-acclaimed inventor of Bitcoin, think about Buffet’s position?

As far as Craig Wright is concerned, Buffet is discussing BTC, not Bitcoin, therefore Buffet is right on that. Contrasting BTC with Bitcoin, Wright claimed as follows: “Bitcoin has value as it is a LOW FEE system for micro payments. If it does not make payments under a US cent, if the fees exceed a fraction of a cent… there is no value.” In a closing line, he said “Bitcoin does this, but some fraudulently pass BTC off as Bitcoin.” 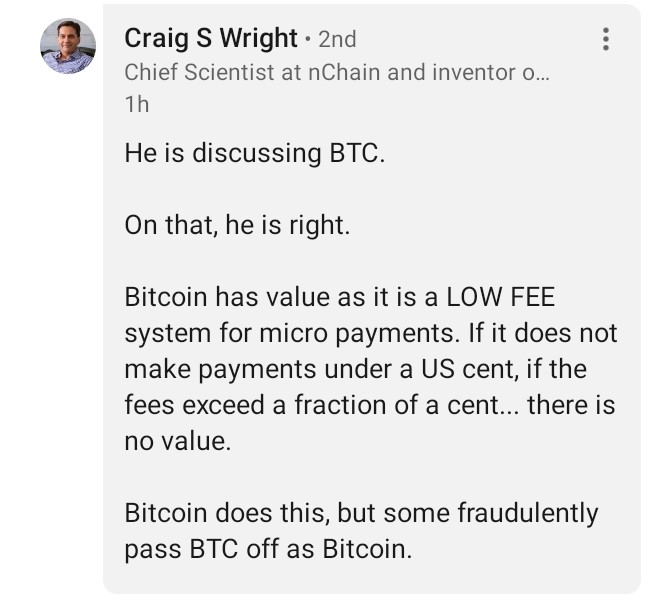 While blockchain technology may mean different things to different people depending on its application, it is gradually transiting from just being a buzzword to becoming a technological innovation that innovators continue to apply across various sectors and industries. Blockchain, as a distributed ledger technology with cryptographic security, has been described as the third-generation Internet that […]

A new stablecoin is coming to town, EUROC. EUROC is backed 1:1 by the Euro. Although backed by the currency of the European Union, EUROC is from the US: Circle. Now let’s circle back on how this started. Circle, issuer of the USD Coin (USDC) stablecoin, announced last Thursday, the launch of a new stablecoin […]

Speaking at a TechCrunch program Tuesday, the Microsoft co-founder & billionaire described cryptocurrencies and NFTs as something that’s “100% based on greater fool theory”. This was Bill Gates’s response to the idea that cryptoassets, which he considers overvalued, will increase in price as long as there are enough investors willing to pay more for these […]

With blockchain technology, building a project and accessing a global community of users and investors has never been easier. Today, entrepreneurs and innovators from across the world, including Africa, are building projects across various industries and sectors. From cross-border transfers, investment products, payments, and remittances in the financial-services industry to innovative solutions in agriculture, entertainment, […]