For the first time in its history, bitcoin recorded 9 red weekly candles in a row. Traders have become wildly bearish and fear is at its peak as the Bitcoin Fear and Greed Index indicates. Beyond fundamentals, fear, uncertainty, and doubt may be fueling this.

After bitcoin made an all-time high of  $69,000 in November 2021, it has since crashed by over 55% to below $30,000 and has since been struggling to sustain a price above this level. The crypto community is now looking forward to a relief rally that will pump the price above $30,000, at least for a while.

Analysts predict that bitcoin could fall to $20,000 and below.

Generally, the hope that bitcoin will recover soon is getting dashed as the market pattern suggests otherwise. The current market trend, because of its semblance to what happened in 2018, appears to suggest that bitcoin may bleed to the bottom. If this happens, the current bear market may become particularly distressing.

Robert Kiyosaki, author of Rich Dad Poor Dad, believes that bitcoin would reach a new bottom. According to him, bitcoin could bottom to as low as $9,000. But other observers do not expect bitcoin price to go that low. A $20,000 plus range is generally expected.

Peter Brandt, Veteran Trader who correctly predicted the 2017 Bitcoin price crash, warns of a dip to $12,000. In his words, “[t]his would be the fourth 80%-plus correction since 2011. It would be the first time a correction goes below the previous high peak”.

Brandt was responding to a tweet by a pseudonymous crypto analyst who goes by the name Cheds, in which he forecasts that bitcoin could tank to the $12,000 levels in the short term. If this happens, it would mark the first time a correction has gone below the previous 2017 historic high of about $19,900. 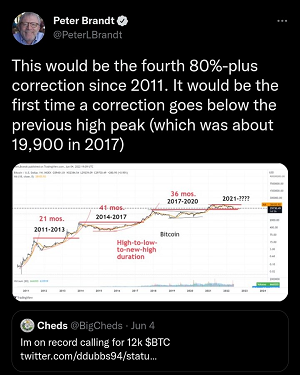 In a correspondence with CAB, Founder & Team Lead of the social payment and trading app for crypto and fiat Kumo, believes that bitcoin at $20,000 is unlikely but if the price eventually goes that low, it was only a matter of time for bitcoin to recover. According to Mr. Tega:

“BTC falling to $20,000 would be paying full respect to charts. I think $20,000 is unlikely except something fundamentally strong emerges in the news that helps the push to that price come true. However low the bitcoin price falls, I expect a bounce to the upside. This is because in spite of the bearish mood in the crypto market today, BTC’s intrinsic value is still intact and has in fact increased, so it is grossly undervalued to say the least.”

Perhaps bitcoin is out on a date testing the bottom of the range.

What does the chart say?

After hitting over $31,500 within the week, bitcoin has resumed its downward movement and is now on the cusp of breaking below $29,000.

Bitcoin has been trading inside the giant falling wedge since November 2021 as shown on the Bitcoin weekly chart. In small time frames, a bearish pennant is under formation which means we have a high chance for another drop. It is expected that the market will drop down to 24,000–20,000 levels. We keep a close watch on the resistance trend line for any breakouts for the start of a new bullish rally.

For now, bitcoin is trading at a make-or-break point. Basically, the bitcoin’s short-term future depends on its ability to strongly hold the $29,000 key support level. But the current conditions suggest that there could be more room to go down before the end of the crypto winter.

Investors will likely continue to assess the bitcoin price action before investing their money. Nevertheless, some analysts remain optimistic about bitcoin’s long-term trend owing to positive adoption developments in recent months as well as its robust fundamentals.

What does this mean to the crypto asset buyer?

Deep down, a lot of people wish that market downturns don’t exist. Investors generally want to see prices always go up, when they buy low. But ironically, when prices eventually go up, some investors find it difficult to let go for the fear of missing out should prices keep climbing up.

However the case, the reality is that prices will always come down and go up. This is why the contrarian approach to investing, especially in the cryptocurrency markets, is so important.

Contrarian investing is a type of strategy in which investors actively go against prevailing market patterns by selling when others buy, and buying when most investors sell.

With so much fear and panic in the crypto market currently, the smart investor can take advantage of the decrease in price by using the dollar-cost averaging (DCA) strategy to buy at key levels.

Dollar-cost averaging is a strategy that aims to reduce the impact of volatility on the purchase of assets. It involves buying equal fiat amounts of the asset at regular intervals. In the long term, the idea is to smoothen your entry into the market so that the risk of bad timing is minimized.

1st Step If you are one of those wondering if it is time to sell that bitcoin and Ethereum in your wallets, you are not alone. And that is the first step to thinking right as a hodler or investor in the ever-volatile crypto market. You are not alone. Now that you know that you […]